Thomas Jefferson (1779) had a radical idea that every child should receive an education at the public’s expense. The education Jefferson proposed was limited in scope compared with the amount of time spent by a student currently. One of the needs in a democratic society required the ability to read and understand what was read. Jefferson’s efforts met with stiff resistance, while all efforts to obtain legislative approval failed.

After the Revolution, America needed to separate itself from Britain. Noah Webster called for the elimination of British texts. He wrote the popular Blue Back Speller that Americanized the spelling of many words. Other authors began writing texts that promoted national ideals. Education was being used to make America a unique country.

In the early 1800s, Horace Mann began the makeover of the Massachusetts school system as the state superintendent of education. Mann began visiting schools, making reports, and publicly arguing for free education for all children. In addition, Mann argued for teacher preparation and standardized equipment. His ideas resulted in free common schools with standard curriculums funded by taxes. This gave some local control back to the state. Shortly after Mann’s death, he was recognized as a public education leader, and Massachusetts passed public, tax-supported, compulsory education.

Although slavery had been abolished in Massachusetts, African American children were mistreated and harassed in integrated schools leading to segregated schools. Concern about the growth of prejudice generated by segregation in schools. A resentment among African American parents over supporting schools their children could not attend led to unsuccessful petitions to close segregated schools. Roberts v City of Boston argued before the state supreme court in 1850 but failed. The court cited that provisions had been made for African American children to have a school even though it was segregated. In 1855 the state legislature abolished segregation in schools.

Since the beginning of American education, the Protestant faith was a dominant influence with philosophy, holidays, and even prayers in schools. Besides widespread prejudice against Catholics, they did not want their children exposed to religious beliefs that parents did not support at home. Well attended Great School Debates argued by Cardinal Hughes against a multitude of Protestant ministers occurred. Hughes attempted to secure state support for Catholic schools, but his efforts failed. The Catholic school system started by breaking away from the public school system.

At the end of the Civil War, slavery was abolished by the Thirteenth Amendment. Unfortunately, although African Americans were no longer slaves, states of the former Confederacy actively fought integration. Reconstruction ended with the Compromise of 1877, signaling the beginning of the Jim Crow era and the erosion of black civil rights and liberties. By 1896, states had been using the doctrine of separate but equal to justify segregation. Facilities and equipment were vastly inferior for African American students, not equal. Plessy v. Ferguson had worked its way up to the US Supreme Court. Plessy argued Louisiana’s law of separate but equal violated the Thirteenth and Fourteenth Amendments and that segregation labeled African American people as inferior. The Supreme Court ruled that separate but equal did not violate the Constitution.

As more and more people migrated to the West for opportunities, state constitutions touted free public educations. So many schools were opening that Many schools opening needed a new source of teachers. Katherine Beecher established teaching as a female moral calling. Beecher’s stand allowed females to journey into the vast expanse of the western plains. With the influx of female teachers, care came into the American classrooms. Students also received moral education through the very popular McGuffey’s Readers.

By 1890, America’s public schools were educating more students than any other nation on Earth. Unfortunately, many minorities were segregated from public education including, African Americans, Native Americans, and Mexicans. In 1896, John Dewey opened his first progressive laboratory in Massachusetts. The progressive philosophy practiced hands-on learning that led to problem-solving and critical thinking. Progressivism was popular until World War II.

In 1954, a unanimous decision crafted by Chief Justice Earl Warren in the case of Brown v. the Topeka Board of Education heard before the US Supreme Court ended segregation in public schools. Cases from Kansas, Delaware, Washington, DC, South Carolina, and Virginia were combined. In Topeka, each of the students who tried to enroll in a neighborhood school was denied admission. Thurgood Marshall, a future Supreme Court Justice, was one of the lawyers who argued the case for the NAACP. The justices stated that separate facilities are inherently unequal and that education is a right. Not much changed; the southern states resisted integration, and African American faculty of students who integrated lost their jobs. As nine students, the Little Rock Nine tried to integrate into a white high school, the Alabama National Guard, under the governor’s direction, prevented the students from entering the school. President Eisenhower federalized the national guard and sent federal troops to enforce the integration in 1959. Finally, when the Civil Rights Act was passed in 1964, stipulating that noncompliance of integration would result in the loss of federal funds, states complied with the Court’s order. By 1972, 91% of students attended integrated schools. 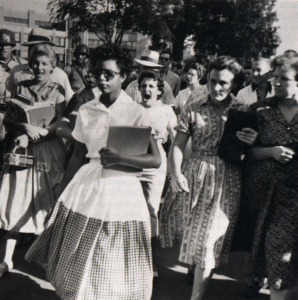 In 1958, the Russians launched Sputnik, the world’s first satellite. America found itself behind in the resulting space race. The National Defense Education Act called for finding and educating more students in science, mathematics, foreign languages, and technology. Monetary support was given to states and students. Vocational education received funding, also. Experimentation and research in media to improve academic subject matter presentation with training was given to teachers.

In 1965, Congress passed the Elementary and Secondary Education Act to provide all students a fair and equal opportunity to achieve an exceptional education. Part of the act’s goal was to close the achievement gap between poor students and all other students. The three major titles of the act are: Title I – Financial Assistance for the Education of Low-Income Families; Title VI – Aid to Handicapped Children; and Title VII – Bilingual Education Programs, which established the federal fingerprints on education. Congress reauthorized the act in 2001 as the No Child Left Behind Act (NCLB). A major provision added all students’ testing in grades 3 through 8 in reading and mathematics, with each state setting its own standards. Widespread criticism caused Congress to reauthorize the act as the Every Student Succeeds Act (ESSA) in 2015. Although the testing continued, the states transferred accountability. States submitted goals and standards with a plan on how the states would achieve them. States also determine the consequences for low-achieving schools (bottom 10%). In addition, all schools are to offer college and career counseling and Advanced Placement courses to all students. 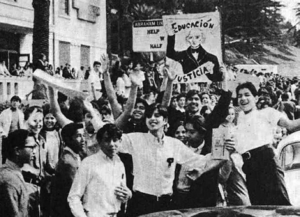 In 1968, Mexican American students from three Los Angeles East Side high schools (Garfield, Roosevelt, and Lincoln) walked out over high dropout rates, lack of college prep courses, rundown schools, and a low number of Mexican American teachers. Student walkouts were a part of a larger scope of activism in the Mexican American community that grew out of treatment as second-class citizens. The walkouts lasted more than a week, with student speeches and clashes with the police culminating with students presenting demands at a board of education meeting. The board of education granted the request for smaller class sizes and more bilingual counselors and teachers immediately. A grand jury indicted the activists, the “Eastside 13,” but an appeals court vacated the indictment in 1970. Actions taken by the students cultivated a sense of possibility in the community.

By 1971, Detroit and its suburbs presented areas of entrenched segregation due to white flight, real estate policies, neighborhood associations, and town policies. A judge approved the Detroit metro plan as a remedy, but the plan failed to garner support from most of the groups involved. In fact, the plan failed to reverse segregation and did not raise the quality of education. When the Supreme Court struck down busing to achieve integration in the Milliken v Bradley case, integration was deemed the city’s responsibility. Detroit is still searching for a solution to this thorny issue.

In 1972, Congress passed Title IX of the Education Amendments Act that states: “No person in the United States shall, on the basis of sex, be excluded from participation in, be denied the benefits of, or be subjected to discrimination under any education program or activity receiving Federal financial assistance” (US Congress). Title IX corrected an oversight by the Civil Rights Act of 1964, which did not prohibit sex discrimination against persons employed at educational institutions. If a school discriminated on the basis of gender, the government would withhold federal funds from the school. Enforcement fell to lawsuits brought by the federal government. The act resulted in the creation of public-school sports teams for girls.

Lau v. Nicols (1974) was decided unanimously by the Supreme Court. Supplemental language instruction was denied to most Chinese students integrated into the San Francisco public school system; therefore, they did not receive a meaningful education. In fact, few students throughout the country received supplemental English instruction since funding was limited and participation was voluntary. The Court stated that supplemental instruction was required because the school district received federal funds. The Court argued that a “sink or swim” policy for learning was prohibited. Subsequent decisions required plaintiffs to provide proof of intentional discrimination, which weakened the Lau finding.

In 1975, the Education for All Handicapped Children Act was passed by Congress that required “public schools receiving federal funds to provide equal education to students with physical and mental disabilities” (US Congress). To ensure that the education provided students with disabilities closely aligned with the education of non-disabled students, students with disabilities were evaluated, and school districts created an educational plan with parent input. Schools were required to provide procedures for parents to dispute decisions with judicial review as a last resort. The act required disabled students to be placed in the least restrictive environment with the greatest opportunity to interact with non-disabled students. Only when the nature and severity of the disability prevented education in a regular classroom were separate schools allowed.