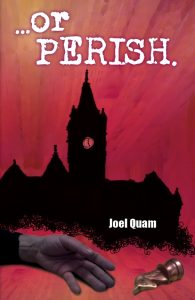 The murder mystery novel has long been a popular genre of literature in America, but also in countries around the world.  Within this field of writing, there also exist several sub-genres.  The cozy offers a softer approach that provides few gory descriptions of violence or explicit portrayals of sex.  The amateur sleuth finds bodies and solves murders, while not working in the field of law enforcement, but rather being in an unrelated field like academia.1 Hard-boiled novels feature a main character, typically a police officer or private detective, who employs rough and tumble tactics to work a case, often cursing and using his muscles.  Noir (French for dark) crime fiction, which may overlap with hard-boiled novels, presents particularly dark stories, where the hero is greatly flawed and the crime graphic and heinous.  In the last two decade, a popular sub-sub-genre of the murder mystery novel is Scandinavian noir (sometimes expanded to Nordic noir).

Murder mystery novelists also choose perspectives for telling the story.  The classic Perry Mason mysteries by Erle Stanley Gardner are plot-driven.  Although readers of the series gain a great affection for Perry Mason, his secretary Della Street, and his detective Paul Drake, readers know almost nothing of Mason’s personal life.  Instead, readers are intrigued by Mason’s courtroom skills and the author’s presentation of plot twists.

Other mysteries are character-driven.  While the elements of the plot are important, the author writes detailed accounts of the characters’ physical appearance, thoughts, and emotions.  The reader understands the motivations of the protagonist, and often that of the killer too.

Otherwise, but in truth rarely, these novels may be location-driven.  The author takes great effort to describe the setting, physical and cultural, of the location of the crime and the investigation.  If location is the primary focus of the novel, then certainly this is a very geographic perspective.  In most cases, though, the setting of the novel serves as an important, but secondary, element of the book.  This is certainly true of Martin Cruz Smith’s “Gorky Park,” where the author’s description of Moscow and of Soviet life gives the reader an excellent feel for the location – thus, a sense of place.2 “Child 44,” author Tom Rob Smith’s characterization of the tense lives of Soviet peoples in the post-WWII Stalinist USSR, also demonstrates this understanding, while still being a mystery novel.

Whether a primary or secondary element of the story, locational description aids the reader in having a geographic sense of place.  This geographic concept is a person’s understanding of a place that goes beyond factual observation to include emotional attachment.  An American’s sense of place of a home state includes the factual quantities and qualities of the physical landscape (mountains, rivers, …) and the social landscape (religion, economy, …), but also comprises intangibles of affection (or other emotions, even dislike) for regions, towns, and other locations in that state.  Internationally, this is often true for countries, certainly for nation-States common in Europe, where citizens possess a bond of nationalism as part of their sense of place for their country.  This may be true even for specific features of the landscape, perhaps a mountain.3 In the case of Scandinavian noir, this sense of place is an prime element of the murder mystery novel.

The origin of this Northern European style of murder mystery novel can be debated.  The book “The Laughing Policeman,” a police procedural featuring officer Martin Beck, was the first of ten related novels written jointly by Maj Sjöwall and Per Wahlöö.  Some would cite this pair of authors as beginning a new trend, though their socially critical novels are not as harsh as later writers’ works.  It is fair to cite “Smilla’s Sense of Snow” by Peter Høeg (1992) as offering a gritty plot, a conflicted protagonist, and a visit to frigid Greenland.  Perhaps Henning Mankell should be listed.  For the American audience, the breakthrough came with Stieg Larsson’s trilogy that began in 2005 with “The Girl with the Dragon Tattoo.”  If I had to pick, I would cite these as their respective countries’ most notable writers in this sub-genre: Norway – Jo Nesbø, Sweden – Stieg Larsson, Denmark – Jussi Adler-Olsen.  While across the region there now are several dozen authors who fit into this sub-genre, let us note a few examples to guide an understanding of the patterns of sense of placein these novels.

The irony of Scandinavian noiris that while the stories feature dark heinous crimes, the actual crimes rates in Scandinavia are quite low.  In Stieg Larsson’s trilogy (particularly the first of the set), the key crimes are the violent torture and murder of women.  Strikingly, the original Swedish title was “Män som hatar kvinnor” which translates as “Men who hate Women.”  In Jussi Adler-Olsen’s “Q Department” series, the first novel “The Keeper of Lost Causes” portrays a sadistic imprisonment of a woman inside a decompression chamber, adjusted to torturous settings. Jo Nesbø’s “The Redbreast” examines neo-Nazis in Norway, while “The Nemesis” follows a gruesome serial killer. Understandably, a noirstory is not a cozy mystery where the killer slays with a mildly poisoned cup of chamomile tea.  These novels highlight the grisly outlier in otherwise very safe settings.  See these statistics on intentional homicide4 per 100,000 per year:.

Or measure by the Global Peace Index5, measuring peace and safety:

The heroes or protagonists in these novels display numerous character flaws, physical weaknesses, and emotional baggage – sometimes all of these together.  Lisbeth Salander, the girl with the dragon tattoo on her back, is a tiny young woman who survives physical confrontation only by the ferocity of her attacks.  Definitely on the autism spectrum, she is a computer genius with no social skills. Beaten by her abusive father, raped by her guardian, and crushed by the system, she survives by her drive for vengeance and her computer hacking abilities.  Eventually, she joins with journalist Mikael Blomkvist in an awkward, sometimes sexual, investigative pairing.  Blomkvist is a serial womanizer, but is compelled to help Lisbeth Salander and to expose the horrors of sexual predation against women.

Jussi Adler-Olsen’s lead police investigator is Carl Mørck.  Mørck is an antisocial slacker, traumatized by the shooting of his now paralyzed police partner Hardy Henningsen. Already on page five of “The Keeper of Lost Causes,” the reader learns that “Hardy had taken his last steps and the fire inside Carl had been extinguished.”  Add a troublesome ex-wife and a good-for-nothing twenty-something son, mix in a bit or more than a bit of alcohol; consequently, Carl doesn’t much care. The boss figures that Carl can be pushed aside to take on the new Q Department, pursuing old unsolved cases that likely have no leads or solutions.

Harry Hole (what a name! – but in Norwegian, the surname is pronounced HO-leh — https://forvo.com/word/harry_hole/ ) is the Norwegian police investigator in the works of Jo Nesbø. Like Carl Mørck, Harry Hole is a miscreant, noted on page thirteen of “The Devil’s Star,” as “the lone wolf, the drunk, the department’s enfant terrible.” 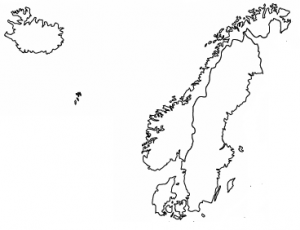 For Scandinavian noir, the frequent winter setting is cold and forbidding. In “The Girl with the Dragon Tattoo,” a noteworthy portion of the novel is set on Hedeby Island in Sweden. Mikael Blomkvist, one of the two main characters, laments the cold when a January day’s temperature dropped to -35°F – “no matter how much wood he put in the stove, he was still cold.”  In “The Marco Effect” by Adler-Olsen, two characters searching in the winter woods note that “Frost and wind had banished all scent from the landscape, the ice-blue glare and glittering crystals of snow conspiring to conflate all visual impressions.  It was sheer hell to be out in such weather.”  Yrsa Sigurdardóttir brings her heroine Thóra Gudmundsdóttir from Iceland to Greenland, going from cold and remote to even colder and even more remote; as the reader learns in the aptly named “The Day is Dark.”

Often these novels offer insights into Scandinavian society.  Issues of immigration are highlighted through Adler-Olsen’s character Assad, an Arab migrant assigned to Carl Mørck’s Q Department.  In “The Marco Effect,” teenage Marco seeks to leave behind his Gypsy life and become a Danish citizen.  In Larsson’s book three “The Girl who Kicked the Hornet’s Nest,” Mikael Blomkvist gains a key bit of help from Kurdish immigrant Idris Ghidi.  In fact, Sweden has the fourth most Kurds in Europe. In the series, Blomkvist is a regular customer at Samir’s Cauldron, a Bosnian restaurant.

Indeed, a whole book could be written on the subject of the sense of place in murder mysteries, as was done by geographer Gary Hausladen in 2000.2  He examined novels from across the world, directed a bit of attention to Scandinavia; however, his book was published before most of the flourishing of Scandinavian noir.

If you read one of these novels, be sure to absorb the understandings of people and places, in other words the geographies, of their settings.  For the Scandinavian setting, this usually means an atypical vicious murder, a cold and dark climate, and a progressive yet not unflawed society.

Remember that Finland is not in Scandinavia, so the inclusion of Finnish authors in this sub-genre would prompt the term Nordic noir.

Meanwhile, recall that Estonia is in Northern Europe. “Apothecary Melchior and the Mystery Of St Olaf’s Church” by Indrek Hargla is the first Estonian crime novel to be published in English (2016).

The Faroe (or Faeroe) Islands are a small set of North Atlantic islands belonging to Denmark; thus, we include them in Scandinavia (Chapter 49). Author David Hewson places his murder mystery novel “Devil’s Fjord” there.

Is this a real-life Nordic noir?  In 2019, Norwegian millionaire Tom Hagen’s wife disappeared.6  A ransom note was found at the couple’s home, but the wife has not been recovered. Officials fear that the wife was murdered and that the husband may have been involved.  The story is a hot topic in Norway. https://www.nytimes.com/2020/05/16/world/europe/kidnapping-murder-norway.html

3 Monger, Christopher, dir. 1999. The Man Who Went up a Hill but Came down a Mountain. Film. Miramax.