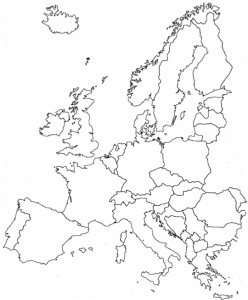 The movement of people across space is inherently geographic. At its broadest, this is called mobility.  Mobility includes all sorts of spatial movement – daily commuting, migration, tourism, and more.  Throughout the study of mobility, geographers note the movements across space, but in doing so, they examine why and how the movement happens.

One key, or actually a law, to mobility is the geographic concept of distance.  Distance is a variable that is crucial to the study of Geography; in fact, it is shown in Waldo Tobler’s First Law of Geography – “Everything is related to everything else, but near things are more related than distant things.”

The United States is well known for its mobility; in fact, arguably America has the most mobile society in the world.  Urban Americans are active commuters, sometimes going over an hour each way to and from work in a car or bus or train.  American wealth allows for extensive ownership of automobiles.  Not counting microstates, the United States trails only New Zealand in number of road motor vehicles (more than two wheels) per 1000 people.  The American road system is unmatched around the globe in a combined measure of quality (paved) and quantity (miles of road).  America’s large land area provides the spatial availability for numerous large cities.  Cities are known to have a magnetic-like attraction for migrants and travelers. Additionally and key to this essay’s topic, the United States has a large land area, divided into fifty states, yet existing without internal borders acting as barriers to mobility.

With the American history as a clearly viewed positive example, Europe sought to organize itself as a set of countries.  (See the essay on The Development of the European Union) The European Union was established in 1993 by the Maastricht Treaty, named for the city in the Netherlands, where the treaty was signed.  At that time, there were fifteen member countries, having now expanded to twenty-seven.  The European Union (EU) subsumed the prior organization, the European Economic Community (EEC).

It was under the auspices of the EEC that an interest in mobility in Europe began.  Likely there were observations about and comparisons to the United States.  The United States is much larger than Europe (not including Russia), yet America’s lack of internal border stops allowed it to produce much more efficiency transportation mobility than found in Europe. Could borders in the EEC be regulated more like American borders?

The initial Schengen agreement was among only five of the countries of the EEC.  Like the EU’s Maastricht agreement, this was named for the city where it was signed (in Luxembourg). The Benelux trio of Belgium, the Netherlands, and Luxembourg were joined by West Germany and France in concurring to gradually reduce controls at common international borders.  Like the EEC’s broadening into the EU, the number of countries interested in joining the Schengen Agreement also expanded.  Though it originally existed outside of the EEC and EU, in 1999 the Schengen Agreement officially was integrated into the laws of the European Union, though it allowed for Ireland and the United Kingdom to opt out. Countries joining the EU after 1999 were expected to become members of the Schengen Agreement as well, but were also able to postpone immediate enrollment.  Thus, it is that Croatia, Bulgaria, and Romania do not yet count within the Schengen fold.  The appeal of open borders brought non-EU countries to participate in the Schengen system, including Norway, Iceland, Switzerland, Liechtenstein, and the microstates of Monaco, Vatican City, and San Marino.

The Schengen Agreement has widespread support in Europe, though some populist politicians preach fear of terrorists maneuvering through Europe’s open borders.  Supporters counter that security is maintained and improves with integration of Europe, not with fragmentation.  With over 400 million people living in Schengen countries, the benefits to trade, travel, and tourism have been significant.  Even by 2010, three Schengen countries (#4 Italy, #5 France, #6 Germany) ranked in the top six countries in the world, in terms of total road passenger miles.  Not surprisingly, the United States was the top country in this statistic.  In 2014 in the measure of tourist trips per person, the top countries included #1 Finland, #2 United States, #3 Sweden, #4 Denmark, #5 Norway, #10 France.

Here we see a sign at the border of Latvia, where there is no border control.  Travelers simply drive into Latvia, in the same way that a Minnesotan simply would drive into Wisconsin.

“Where’s Waldo?”  Geographer Waldo Tobler, mentioned above, was not the inspiration for that popular series of books and images.

In times of great concern, Schengen countries may reestablish border controls, as some countries did during the European migrant crisis in 2016.

Traynor, Ian. 2016. “Is the Schengen Dream of Europe without Borders Becoming a Thing of the Past?” The Guardian, January 5, 2016, sec. World news. https://www.theguardian.com/world/2016/jan/05/is-the-schengen-dream-of-europe-without-borders-becoming-a-thing-of-the-past.