I suggest that you begin this topic by going to YouTube to search for a history of Russia. There are animated videos that are entertaining and informative. Let’s consider how this historical and geographic expansion took place. At present, Russia is by far the largest country in the world, as measured by area.  This has been true for more than a century.  The Soviet Union was even larger, by two million square miles; however, the breakup left Russia as the main surviving piece and indeed as the largest country in the world.  How did this all happen?

By 800 BCE, there was no country Russia, but there were scattered clusters of Slavic peoples in the region north of the Black Sea and east of the Baltic Sea.  However, there were numerous other peoples in the region and passing in and out of the region.  Over the several following centuries, different peoples entered the area, even as Slavs became somewhat more organized.  Asiatic tribes crossed the Ural Mountains from the east.  Goths and Huns expanded their territories in the early CE years.  Subsequently, Avars, Khazars, and Bulgars each took turns of prominence in the region, even with a Slavic recovery in the 600s CE.

The first significant organized Slavic territory was prompted by Viking (in Russia, cited as Varangian) trading interest in the region.  Viking raiders and traders sought to use the southern-flowing Dnieper and Volga Rivers in order to greatly expand their trading networks to the corresponding Black and Caspian Seas.  As these Norse developed these trading routes, some of them settled in the areas along the routes.  In 880, the capital became Kiev (now Kyiv, the capital of Ukraine), thus starting the rule of Oleg over what then gained the name Kievan Rus.

As this essay is interested simply in the expansion and contraction of Russian lands, we begin with Kievan Rus, but do not cover all the historical details.  Indeed, after the beginning of Kievan Rus, there was period of prominence for the city of Novgorod and its surrounding territory, as well as the ascendance of Moscow.  However, all of these territorial holdings remained west of the Ural Mountains and were historically constrained by German expansion, Lithuanian conquest, and the famous Mongol invasion.  From 1359 to 1425, Moscow was able to increase its holdings between other competing powers.  By 1533 Moscow’s lands extended to the Arctic Ocean.

The significant eastward expansion of Russia arrived with the reign of Ivan IV (Ivan the Terrible) in 1547.  In 1552 Ivan’s troops ousted the Mongols from Kazan, then in 1556 from Astrakhan.  The elimination of these Khanate’s holds on Russia allowed Ivan IV to push across the Ural Mountains.  Cossack forces under their leader Yermak brought western Siberian lands under Moscow’s control.  The breadth of Russia’s western holdings would vary over time, though in net terms gaining; however, the eastward expansion was an inexorable push to the Pacific Ocean and a slide into Central Asia.

The conquest of Siberia demanded little in terms of battle against native peoples, but a great deal in the movement of settlers across vast distances and through miles and miles of cold and forest. Russians, Cossacks, and Ukrainians established these and other towns as they moved eastward:

Under a series of female leaders – Anne (1730-1740), Elizabeth (1741-1761), and Catherine the Great (1762-1796), Russia sought to expand its lands west of the Urals Mountains, pushing against the Ottoman Empire to the south, moving westward toward Poland, and edging northeastward looking to Sweden. Eventually, Russia secured territory in each direction, for instance, taking Finland from Sweden in 1809.

Russia pushed southward into the Caucausus Mountains, between the Black and Caspian Seas. Russia’s current borders there are similar to the Russian Empire’s reach in 1763, but the empire continued a back and forth with western borders. Advances through Georgia and Azeribaijan brought the empire again to abut Persia in 1813, while movement into Armenia again reached the borders of the Ottoman Empire in 1828 and more so in 1878.

Similarly, the Russian Empire expanded throughout Central Asia from 1763 to 1914.  Conquest of the region known then as Bokhara, as centered by the now city Bukhara brought the Russian Empire perilously close to the British Empire in India.  The two empires agreed to the establishment of the Wakhan Corridor, a narrow strip of land designed as part of Afghanistan, to keep the two powers separate.

Upon the dawn of World War I, the Russian Empire had reached its farthest extent, slightly larger than its heir, the Soviet Union.  Holdings in Finland and Poland were lost in the war, never to be recovered.    Russia’s convincing defeat in the war, followed by its civil war to determine political but not royal successors to the monarchy, led to noteworthy losses of territory.  In addition to the losses of Finland and Polish territory, Russia dropped control of Estonia, Latvia, and Lithuania – the Baltic States that gained their independence.  Ukraine and the Caucasus region’s Georgia, Armenia, and Azerbaijan also secured independence; however, they were subdued and incorporated into the new Soviet Union. Bessarabia, a portion of modern-day Moldova, was annexed by ethnically similar Romania. 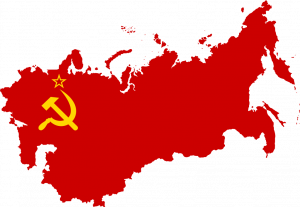 In World War II, the Soviet Union’s victory in Eastern Europe allowed them to reclaim the Baltic States, part of Poland, Bessarabia, and a corner of Finland.  This brought the USSR to its fullest state, nearly matching the land holding of the fullest version of the Russian Empire.

Of course, the collapse of the Soviet Union cracked this vast land into fifteen pieces, fifteen new countries. While Russia remains the world’s largest country by area (6.6 million square miles), the other fourteen new countries chopped off two million square miles for their own territories. By seeking its own post-Soviet independence, tiny Chechnya sought to create a precedent for the many ethnic regions of Russia. The Russian military twice slammed Chechnya in civil wars, forcing the upstart land to remain in Russia.

It appeared that Russia would maintain its size without territorial gains or losses; however, Russia’s annexation of Crimea in 2014 changed that view. Russia’s fight in eastern Ukraine and its apparent interest in lands in Estonia and Georgia indicate that Russia’s land size may change again.

Russia’s Siberian expansion reached the Bering Strait, but Russians moved across the water to claim Alaska.  The United States bought Alaska from Russia in 1867.  Many Americans considered this purchase to be foolhardy, characterizing it as “Seward’s Folly,” referencing the American Secretary of State who led the negotiations.

The Trans-Siberian Railway reached Irkutsk in 1899. By 1917 track stretched from Moscow to Vladivostok (on the Pacific Ocean) without needing passage through China.